Here we will have a look at three different conic sections: 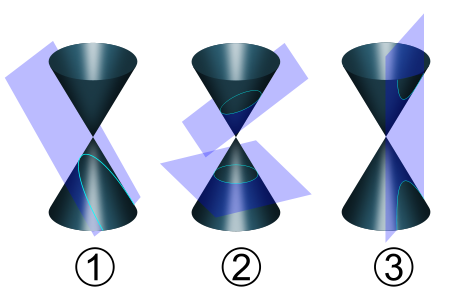 The parabola is a conic section, the intersection of a right circular conical surface and a plane parallel to a generating straight line of that surface. The equation for a parabola is

The equation of a circle with center at (a,b) and radius r units is

If the ellipse has its center at (m,n) the equation could be written as

A hyperbola is a curve, specifically a smooth curve that lies in a plane, which can be defined either by its geometric properties or by the kinds of equations for which it is the solution set. A hyperbola has two pieces, called connected components or branches, which are mirror images of each other and resembling two infinite bows.

The equation of a hyperbola with a center at (m,n) is

Write the given equation on the standard equation form for ellipses