We often come across two triangles that share the same proportions, i.e. the angles are alike though their sizes differ. These are called similar triangles. The simplest method of illustrating two similar triangles is first to draw a triangle, and then to draw a straight line so that we now has a smaller triangle within the large one. 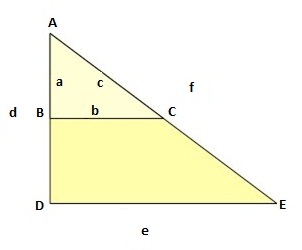 Triangles that are similar are shown as